I'm not sure how to profile people who take pride over their desk, I used to think most people working on the web cared, having seen loads of top X office space posts on web development blogs. However, having worked with developers and designers, the ones who care about keeping their workspace clear of clutter are in the minority.

In December 2009 I remodeled my bedroom, it has a double bed raised 1.8m from the floor, with a full size desk below, my workspace was featured on lifehacker, and I have been making small adjustments ever since.

I wanted a big desk, so I could have my computer setup, and still have enough space to spread out papers and notes. I also wanted a double bed, yeah a lot to ask in a room with only 8 square metres of floor space.

The only realistic option was to build vertically, I didn't want to just buy a loft bed, I wanted a desk which was made for the space, something which didn't have gaps between it and the wall, something which wouldn't rattle, the only solution was to go custom.

The platform for my bed is 2 x 1.4 metres, the same width and slightly longer than a double mattress. I would support the platform with three pieces of 4 x 4. And it would be secured into the wall on the left and back and the wardrobe on the right.

Two of the supports would be used as a ladder; this meant my desk couldn't be quite as deep as the platform so it would be possible to put your feet on the rungs.

I decided to build some speakers and lighting into the platform, I used LED lighting so there was no fire hazard.

I placed some holes for wires around the edge of the desk - giving me plenty of flexibility for peripherals.

I wanted a room which was light and airy, I chose white for the walls, the woodwork is off white and the carpet is cream. There is a splash of colour on the wall opposite the desk, a bright green.

So many people want to know about the chair, it's a Kawasaki Paddock Chair.

At Lucid Games the whole company used Macs and we were developing a game for the iPad. After a few months all of my hate towards Apple had gone, I decided I could justify the money and bought myself a MacBook Pro, and once my contract had finished I bought an iPad too.

I also constructed my own NAS box, using a low power CPU, and four 2TB HDDs running FreeNAS, giving me a 5.2TB of usable space which I use for storing; photos, videos, and backups.

Unfortunately my old amp gave up the ghost, and as I moved away from a desktop onto a laptop, I have stopped using the built in speakers opting to use a powerful bluetooth speaker most of the time.

I got rid of the awesome chair after using it for almost four years. The old Kawasaki Paddock Chair wasn't terribly ergonomic and in summer it wasn't very ventilated. It's been replaced with a Topstar Open Art mesh office chair, again in bright green.

When I'd first finished the room I really wanted a beanbag, in 2011 my mum bought me a giant orange one which you will find me working on from time to time. 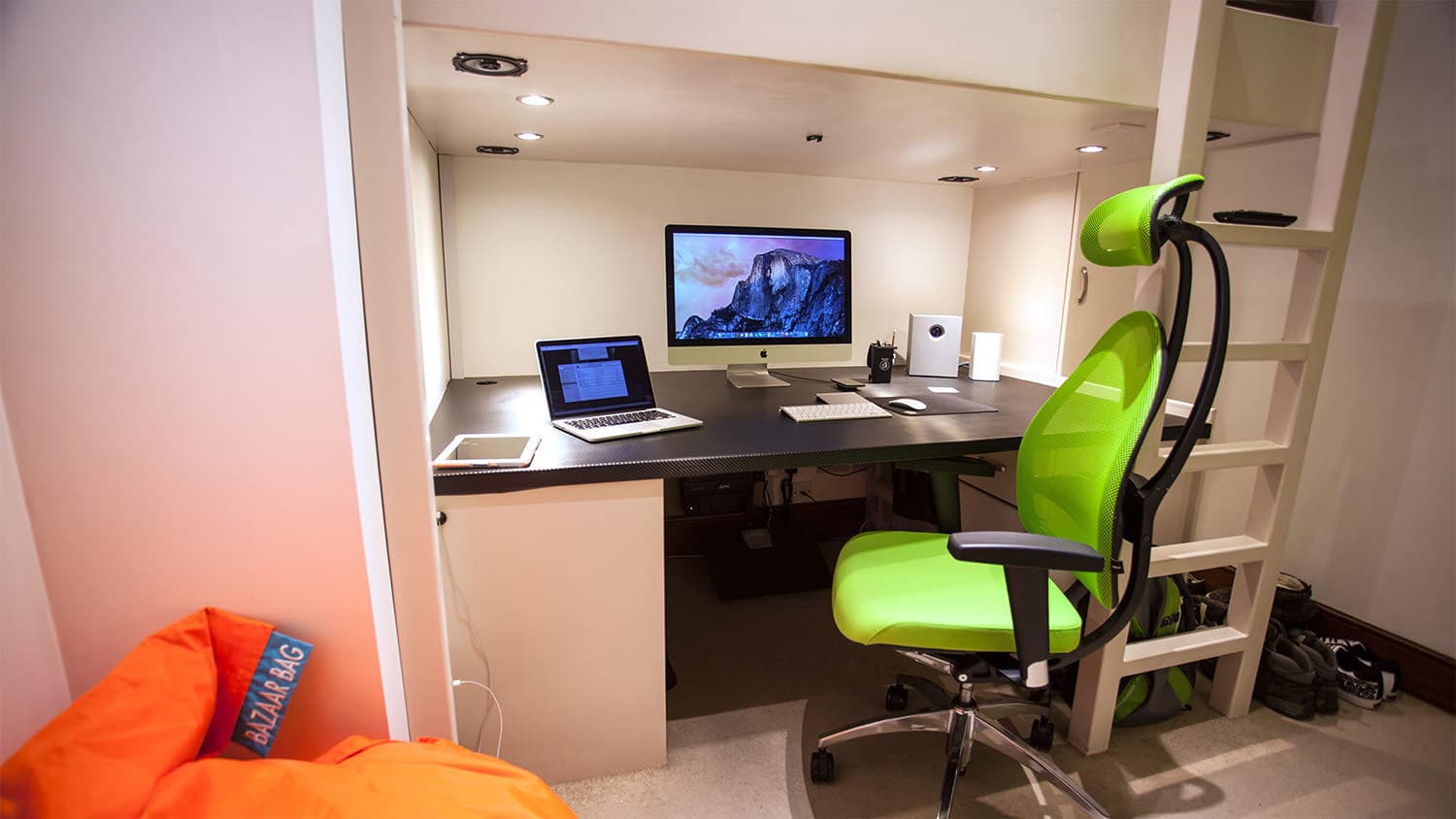 After having the summer off, and working at my desk for a few weeks, I came to the conclusion that I didn't have enough leg room. And having returned from Iceland with more than 70GB of photos, I was becoming frustrated with the transfer speed of my NAS.

So on October the 16th after watching the Apple keynote, I bought the new 5K retina iMac, and a 10TB LaCie direct attached storage drive (configured in RAID 5, as my NAS had been.) This meant it was time to update my desk, removing the cut out for added legroom, and covering the desk in vinyl.

You can take a look at the timelapse I took, Making of The Carbon Workspace, showing the build.

I moved over to Manchester, leaving my brilliant custom built desk forever. I spent most of my time working from my airy city centre apartment. 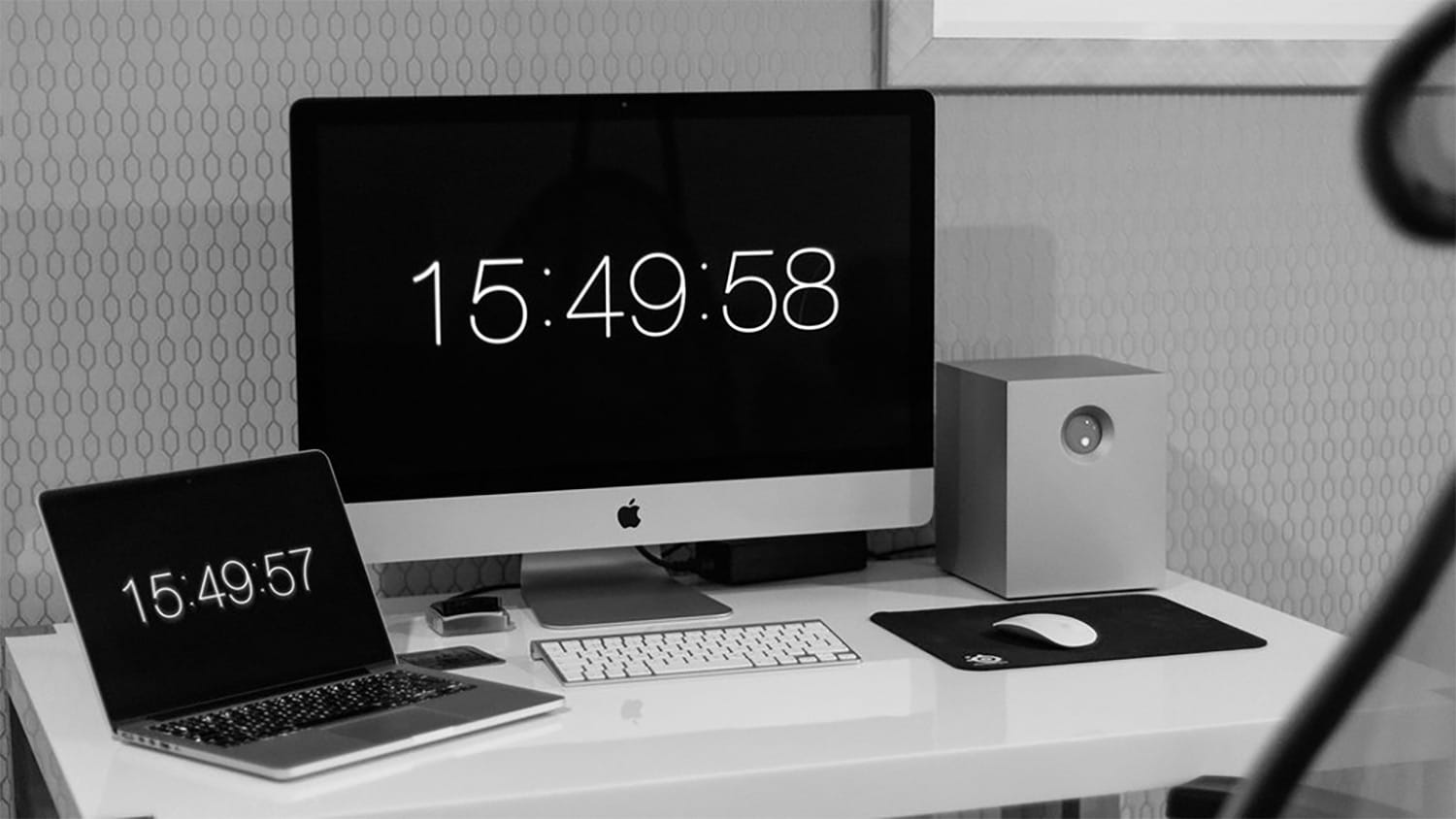 I'd wanted to try living in London so I moved down there, and worked in a co-working space in Battersea. 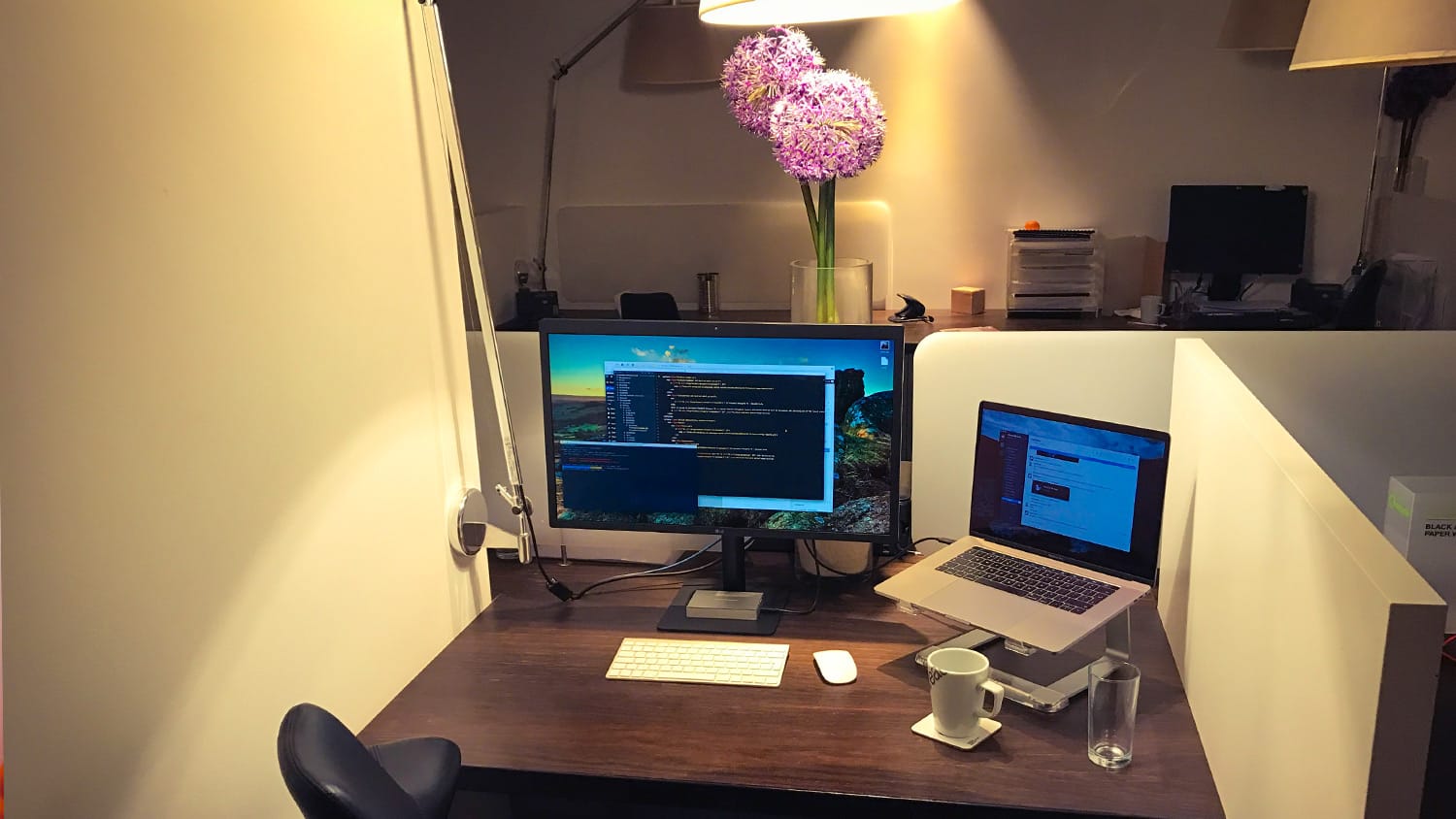 After taking a full time job I moved back up to Sheffield (rented) working remote, and decided it was a good time to buy myself a motorised sitting / standing desk. 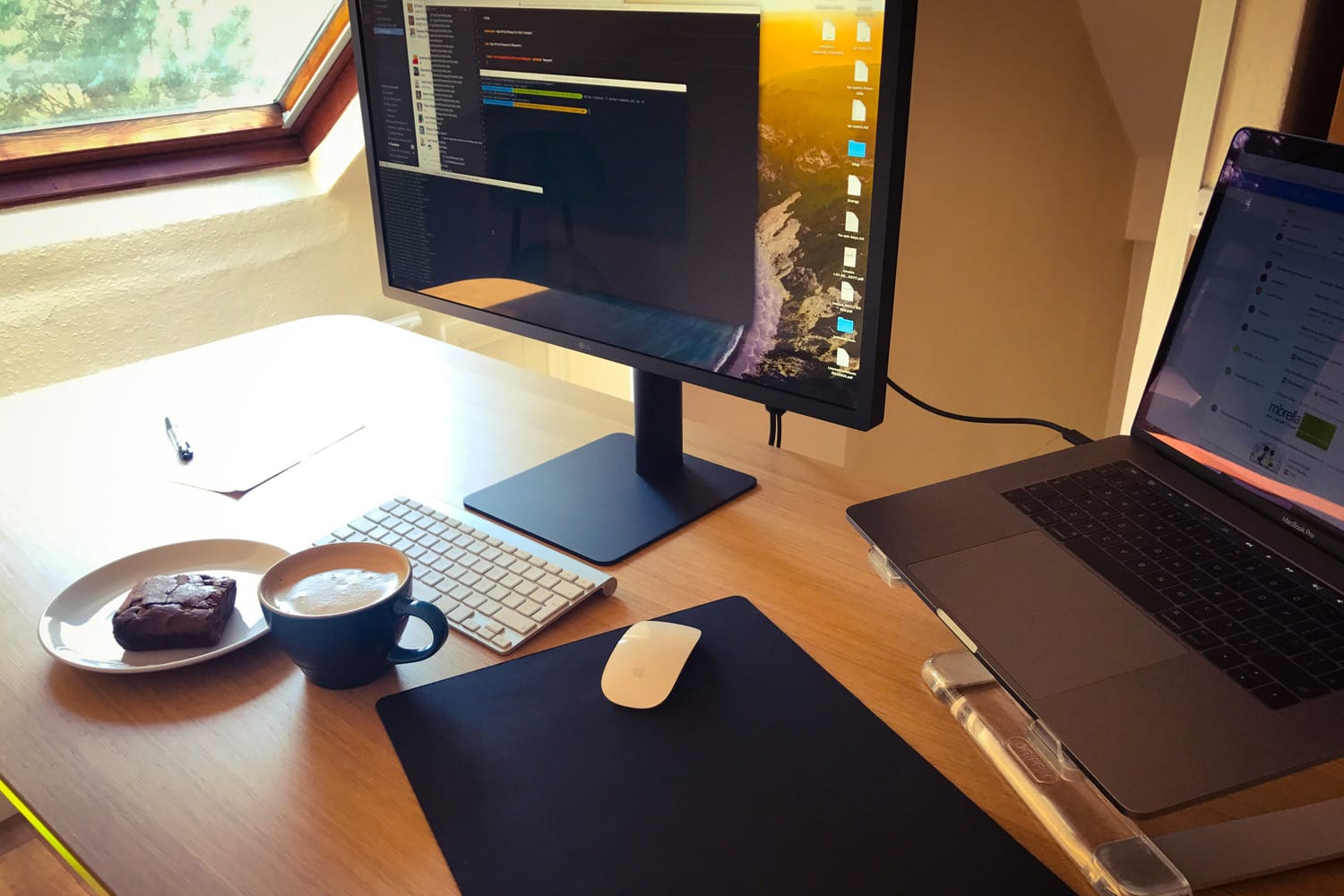 I decided to move to Barcelona, Spain at the start of 2018. And so I got a new coworking space so that I could mix and meet new people, and not stay at home too much. 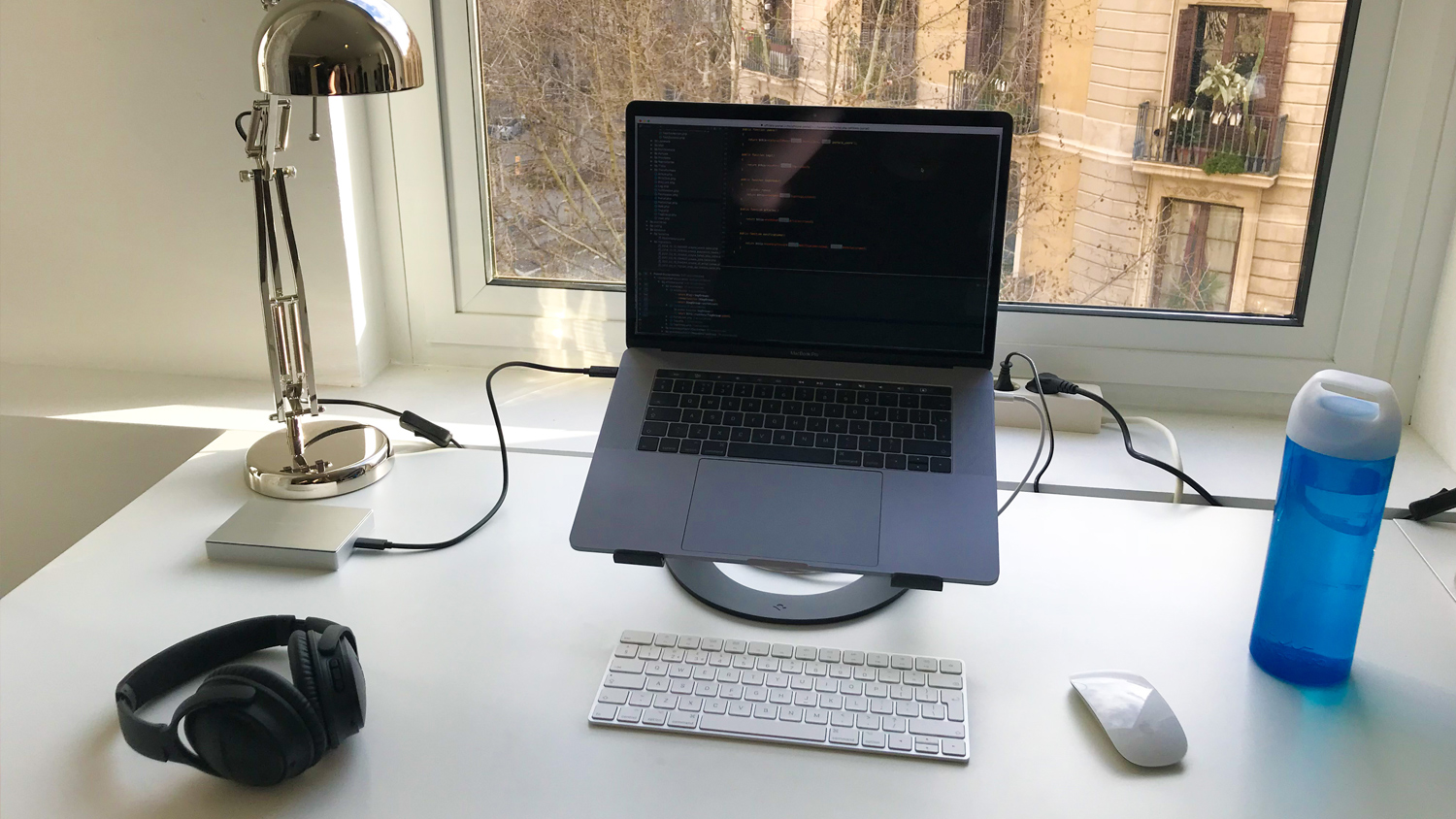 After leaving Barcelona I moved in with my girlfriend and bought a house in Edinburgh with a home office, through the covid pandemic we were both working from here. 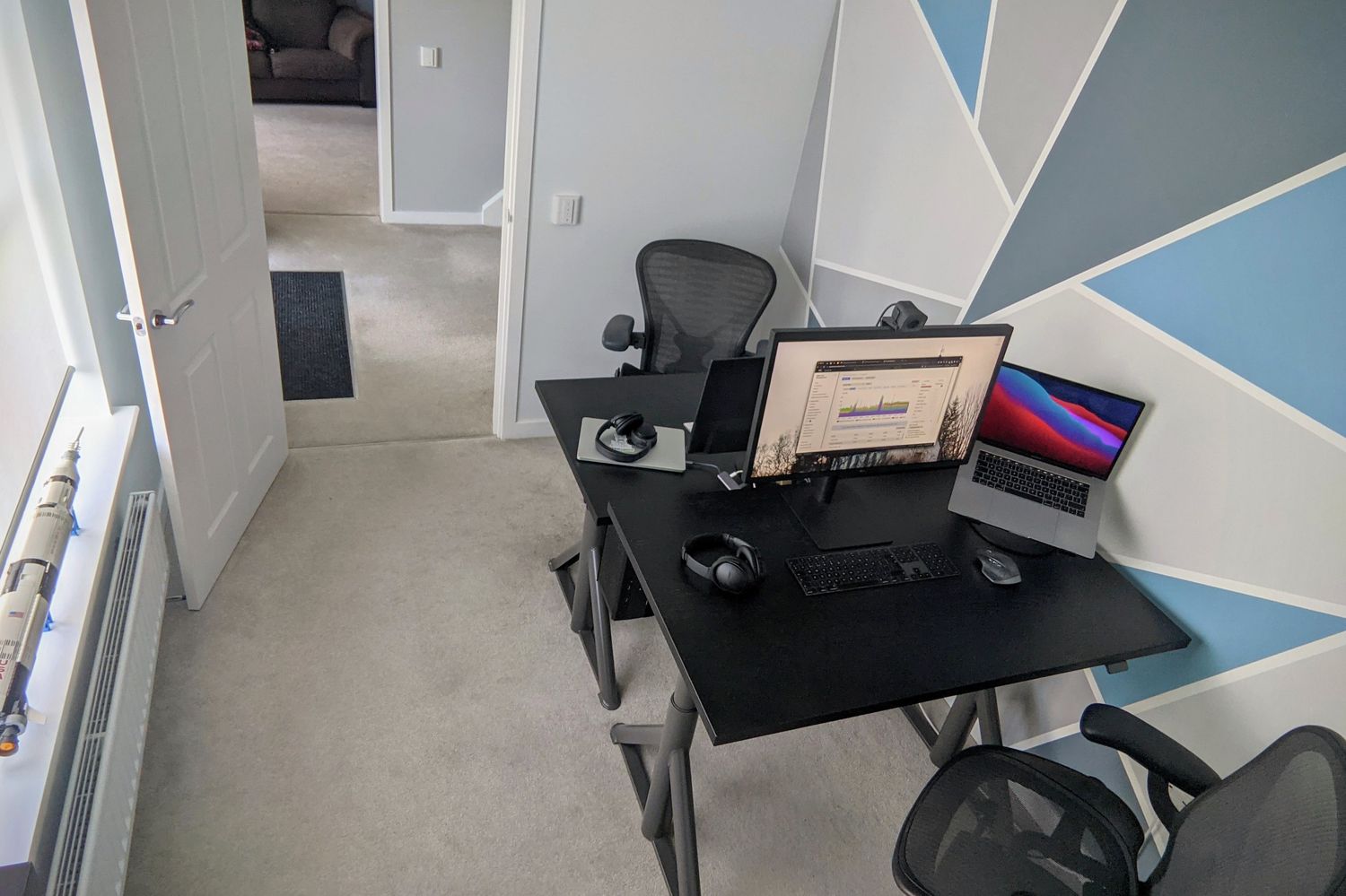